In the fast age of internet did you ever stop and think that how big is the internet ? How much is the volume of data flowing through it ? Probably not. I just came across a image that describes best what all happens in a minute on internet. 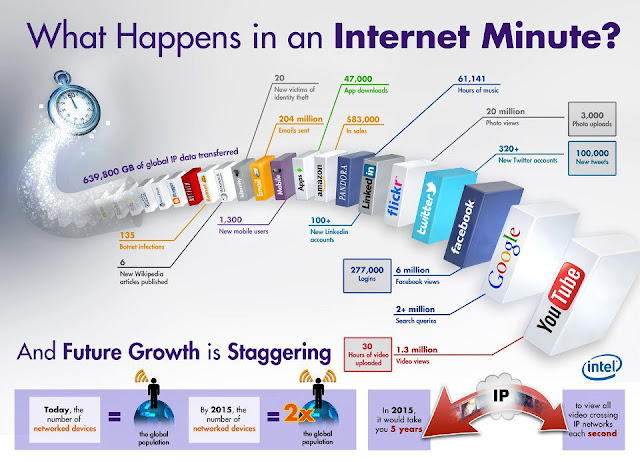 55 comments
Email ThisBlogThis!Share to TwitterShare to FacebookShare to Pinterest

Do you know that till when is Microsoft going to give support for Windows 7 ? If your answer is no then continue reading. The first question that pops up in our mind is why do we need support ? From time to time any software needs update and patches to overcome any new bug or rectification of existing services. The most common of them is the security update patches that Microsoft releases for Windows. These patches are important as they close down any loop holes that might make your system easy targets for hackers and software viruses.

So whenever a patch is avaliable just install it and keep your Windows 7 updated. The following table gives the exact dates of the support avaliable for various versions of Windows 7:

Review Note : Support ends 24 months after the next service pack releases or at the end of the product's support lifecycle, whichever comes first. For more information, please see the service pack policy at http://support.microsoft.com/lifecycle/#ServicePackSupport .

77 comments
Email ThisBlogThis!Share to TwitterShare to FacebookShare to Pinterest

Cloud Computing in 2012 - What Corporations think

As cloud computing is growing more day by day lets see what has the big corporations have to say about it in 2012. Below are series of videos of various corporations where they discuss Cloud Computing.


Below is the CSC's Chief Innovation Officer, Lem Lasher, discusses what the future holds for cloud computing in the near future.


Below is CSC's Siki Giunta - Vice President of Cloud Computing and Software Services- Among Women Worth Watching in 2012.


Below is the video of IEEE Fellow, Stuart Lipoff, discusses the trend of cloud-based applications at the 2012 Consumer Electronics Show. According to Lipoff, these services, such as the iCloud, are able to take complex processing situations that aren't practical to do in a small, inexpensive device and battery and store the information in the cloud. Lipoff notes how the device is then used as a terminal to get access to the information and coordinate things that would have been otherwise impossible. Lipoff descries new applications such as pattern recognition and various forms of artificial intelligence, such as facial recognition, as being some of these applications shown at CES.